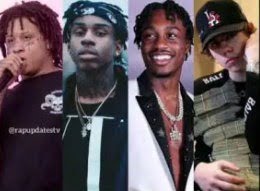 Trippie Redd comes through with a new song titled “Outside,” featuring Lil Tjay, Polo G, and The Kid LAROI. The melodic track is scheduled to appear on Trippie Redd’s upcoming album TRIP AT KNIGHT and was first previewed by The Kid LAROI on June 10, 2020.

Trippie Redd announced the collaboration on his Instagram story on January 9, 2021, following which all artists confirmed their involvement in the track by reposting Trippie’s story.

The full song leaked only three days later, on January 12, 2020. It’s unknown if the leak will affect the song’s placement on TRIP AT KNIGHT.