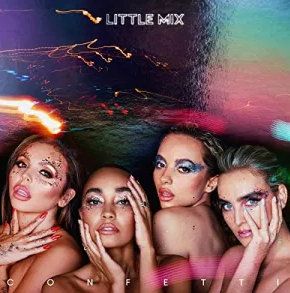 Little Mix presents a brand new project titled “Confetti.” Confetti is Little Mix’s upcoming 6th studio album which is scheduled for release on November 6, 2020 through RCA and Columbia Records. It is the groups very first album after departing with their previous record label Syco back in 2018.

On March 12, 2020 the girls released a music video for their hit song, Wasabi which at the end of the video they had ended the LM5 era with a big bang with confetti and a progress bar that said “New Era Pending”. This had confirmed that the girls were getting ready for their new upcoming era. In the same month Jesy Nelson, Leigh-Anne Pinnock and Jade Thirlwall had confirmed in a interview. that they were currently in the process of recording the new album.