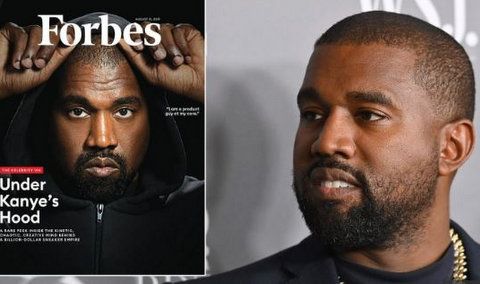 Kanye West, the Hip hop star and fashion designer, becomes a billionaire as his net worth valued is said to $1.3bn (£1.05bn), after his sneaker line was described as “one of the great retail stories of the century”, according to Forbes magazine.

Kanye seems to be unhappy with Forbes despite he was officially classed as a billionaire, he claimed they had undervalued him.

Kanye was said to have sent a text to one of their employees reading: “It’s not a billion. “It’s 3.3 billion since no one at Forbes knows how to count.”

According to Forbes magazine the brand is “challenging Nike’s Air Jordan for sneaker world supremacy” and is “one of the great retail stories of the century”.

West, 42, is also among the biggest-selling music artists of the last 20 years.His GOOD Music record label and the rights to his back catalogue are worth at least $90m (£73m) in total, according to Forbes.

The rapper and his wife, the reality TV star Kim Kardashian, also own some properties in Los Angeles and Wyoming.

Forbes, which stressed there was a lack of independent verification for its figures, has listed West as having debt of about $100m (£81m). That adds up to a net worth of $1.3bn (£808m) in total, the magazine said.

This places him above sister-in-law Kylie Jenner, who has a $1bn net worth, largely from her cosmetics business.

West was displeased with an article last year in which Forbes refused to class him as a billionaire.

The rapper is said to have texted a reporter saying it was a “disrespectful article” that was “purposely snubbing me”. He was further provoked earlier this month as Forbes released its annual billionaires list, with West’s name missing.

“You know what you’re doing,” West is said to have texted a Forbes journalist. “You’re toying with me and I’m not finna lye down and take it anymore in Jesus name.”