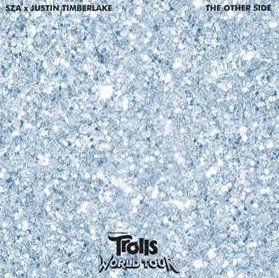 SZA & Justin Timberlake – The Other Side

SZA and Justin Timberlake links up a new hit song titled “The Other Side.” “The Other Side” serves as the first single for the Dreamworks’ sequence for the animated film Trolls World Tour.

For the major theme of the movie, Justin Timberlake now invites SZA.

The Grammy and Oscar Winner Ludwig Göransson and Justin Timberlake himself handled the production of the song. It brings back the disco vibe from the 80’s.

Since teaming up with Meek Mill on ‘Believe’ earlier this year the new song ‘The Other Side’ is Timberlake’s first single .

SZA, meanwhile, last featured on a song while on Post Malone’s ‘Hollywood’s Bleeding’ track “Staring At The Sun”. She recently revealed that she has collaborated with Sam Smith and will release new music this year.