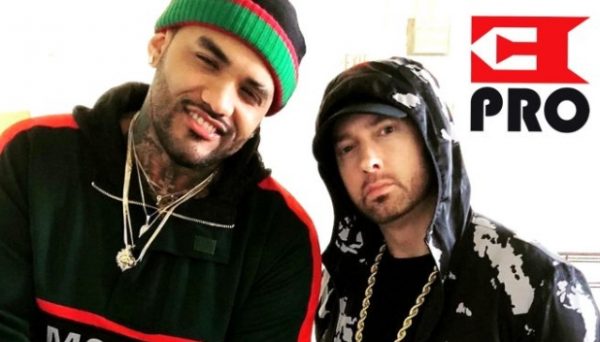 Joyner Lucas Ft. Eminem – What If I Was Gay?

American rapper, Joyner Lucas teams up with Legendary rapstar, Eminem on a new track titled “What If I Was Gay?.”

Eminem and Joyner Lucas links up on a collaboration “What If I Was Gay.” On the new song the dup talked about the controversies they’ve been facing throughout their respective careers.

Precisely, Eminem has been attacked for homophobic lyrics and comments, which the title plays on. Em addressed the accusations during a December 2017 interview with Vulture:

The first time I got a taste of being called anti-gay was on ‘My Name Is’ when I said, ‘My English teacher wanted to have sex in junior high / The only problem was my English teacher was a guy.’ All I was saying was I don’t swing that way. So when I started getting flack for it, I thought, Alright, you people think I’m homophobic… I was trying to push the buttons of people who were calling me something that I wasn’t. The honest-to-God truth is that none of that matters to me: I have no issue with someone’s sexuality, religion, race, none of that.

On October 28, 2019, a snippet of the track sufaced online. A full version of the track appeared online on October 31st, 2019. It’s unknown whether it is set to be officially released or placed on an album at this time.

This track marks the second official collaboration between EM and Jorner Lucas after August 2018’s “Lucky You.”