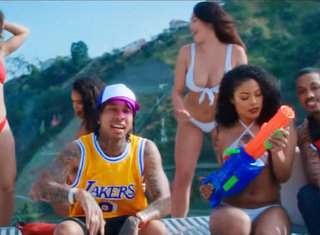 Tyga comes through with a new song titled “Taste” featuring Offset. “Taste” release for digital download and streaming by Empire Distribution and Last Kings Music was on May 16, 2018.

“Taste” was produced by D. A. Doman and incorporates a guest appearance from American rapper Offset. The single crested at number eight on the Billboard Hot 100, becoming his first chart entry in three years.

It is the second highest charting single of his career as a lead artist, behind “Rack City” from 2011.

The music video droped on May 16, 2018 through YouTube. The visuals was directed by Tyga and Arrad and includes cameo appearances from Wiz Khalifa, 2 Chainz, Joyner Lucas, King Bach and Ronny J.