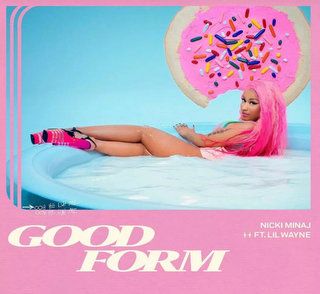 Good Form (Remix) by Nicki Minaj featuring Lil Wayne was produced by Plu$$ & Mike WiLL Made It. Plu$$ is an American producer and rapper originally from Atlanta. He has collaborated with many artists such as Kendrick Lamar, Beyoncé, Future and so on.

Take a listen to “Good Form Remix” by Nicki Minaj and share your review below..

You make that ass jump like my heartbeat
And if you let me eat the pussy then it’s shark week
Hello may I speak to Tunechi, may I ask who’s callin’?
Everybody got the juice without a glass to pour it
I want my cake and eat it too and after that I’m starvin
I feel like Adam but I’m bout to eat an apple on ya