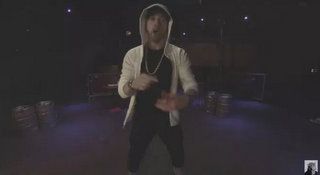 Eminem drops a new freestyle titled “Kick Off“. As you might know, a battle rap film called Bodied also produced by Eminem, Paul Rosenberg and a couple of others came out recently.

It received good reviews and just a few moments ago. Eminem also took to Twitter to tell us how it inspired him.

The video was also shot at The Shelter at St. Andrew’s Hall in Detroit, Michigan. Best known for being one of the first stages Em also performed on as an up and coming battle rapper.

The iconic venue is immortalized in his 2002 feature film 8 Mile.

Also, His other songs include “Venom“, “Lucky You” Ft. Joyner Lucas and “The Ringer“.

Take a listen to “Kick Off Freestyle” by Eminem and share your thoughts below..