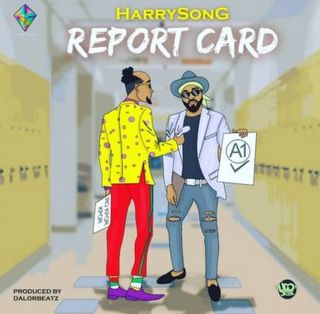 Nigerian artist, Harrysong dishes out a new song titled “Report Card“. The song was also produced by the fast rising record producer, DalorBeatz. He serves us with an Afro Pop song for our listening pleasure. Also, mixed and mastered by Suka Sounds.

Harrysong who opened the year with songs; ‘Confessions‘ featuring Seyi Shay and Patoranking. ‘Happiness‘, ‘Selense‘ and ‘Selense II‘ featuring Iyanya and Dice Ailes and his last release ‘Tekero‘, dishes out a new banger he also tagged ”Report Card”. This new record shows that the singer who had been battling with Depression is back and better.

Also, Harrysong has featured in other songs like “Confessions” ft. Seyi Shay & Patoranking, “Journey” and “Happiness“.

Take a listen to “Report Card” by Harrysong and share your thoughts..

Ropopo Report Card
Who be the baddest?, Show me the great,
She be the illness, who be the maddest.
Ropopo report card, Ropop report card
Show, show your report card ooo